We are proud to announce the recent publication by Sharma lab/ApoptoSENS team in the journal Cells describing the role and controversies involving the aging of Natural Killer (NK) cells and age-related NK cell dysfunction. This review focuses on recent advances and open questions in understanding the interplay between systemic inflammation, senescence burden, and NK cell dysfunction in the context of aging and potential therapies for age-related diseases. 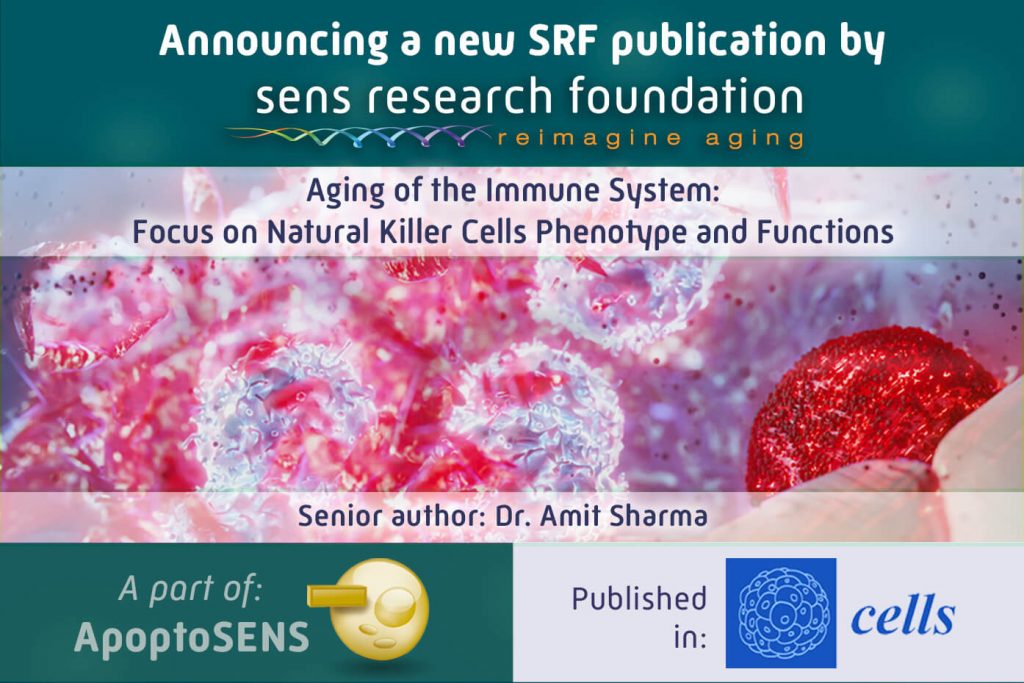 Senolytics — drugs that selectively destroy senescent cells (senolytics) — have been shown to powerfully rejuvenate mice and to reverse multiple diseases of aging in animals, from atherosclerosis, to kidney disease, to osteoporosis, to Parkinson’s disease — and beyond. But because these drugs target pathways that are necessary for normal cell function, they can come with side-effects — the most notable being the crash in platelets (and resulting risk of fatal bleeds or strokes) that can accompany the experimental senolytic navitoclax.

But our bodies are actually equipped with an inborn army of immune cells that selectively identify and destroy senescent cells. To date, the most important of these “immunosenolytic” soldiers have seemed to be Natural Killer cells (NK cells) — though we will have an announcement to make on this front in the coming months. But if the body already has this defensive force, how do senescent cells still manage to accumulate in our tissues with age and wreak havoc on our health?

SENS Research Foundation scientists are working to harness NK cells to more safely and effectively clear senescent cells out of our tissues. Dr. Amit Sharma and his team at SRF are developing ways to either rejuvenate our own NK cells’ ability to detect and destroy senescent cells in aging tissues, or to augment that capacity with NK cells engineered to be more lethal senescent cell hunters. To reach those goals, they realized they needed a more efficient way to create large numbers of NK cells from mixed white blood cells isolated from human blood. In new peer-reviewed scientific paper, they showed other scientists how they did it. Their main innovation might seem to be an obvious one: to actually isolate NK cells to study them. Previous scientists have mostly used very mixed populations of blood cells, sometimes removing T-cells or other specific cell types but never isolating NK cells exclusively. Dr. Sharma used an existing kit to make sure that what they were seeing came from the NK cells and not from other cell types.

They also saw that the way that previous researchers had studied NK cells’ ability to destroy senescent cells was quite different from the conditions NK cells actually confront as they patrol for NK cells in the body, potentially leading scientists to chase after interventions that work well in a Petri dish but have no effect or are unsafe when carried out in living, breathing humans. This is probably because most scientists conducting these studies don’t have a specialized background in immunology: instead, they design their experiments based on a general background in the biology of aging or cancer biology, or as specialists in senescence per se, but The biggest problem the SRF group corrected is that previous studies have cultured low numbers of senescent cells together with very high numbers of NK cells, creating a situation where NK cells are effectively shooting zombie fish in a barrel. The Sharma lab tested more realistic conditions in which one NK cell encounters one senescent cell, or no more than three, instead of ratios as high as one NK to 20 or even 80 senescent targets.

Conversely, having given NK cells so many senescent cell targets that they can hardly fail to kill some, most previous studies have only set NK cells loose for a few hours, when NK cells have a half-life in the body of ten hours. So the Sharma lab gave NK cells an amount of time to engage their enemies that reflects how long they actually hang out in tissues, with experiments running from 16 hours to four days. This also gives the NK cells the ability to reveal their full range of powers, since some of their cell-killing weapons only engage over extended time periods.

Finally, previous studies on NK cells’ immune surveillance of senescent cells have cultured them in very high levels of interleukin-2 (IL-2), an immune-signaling molecule that triggers NK cells to create more of themselves and makes them more aggressive. At SRF, Dr. Sharma used levels that reflect levels in the body.

The first set of discoveries revealed by this new system: NK cells are actually most selective for senescent cells when the ratio between NK and their potential targets are quite low. As you introduce more and more targets into the mix, NK cells tend to kill more senescent cells, but also kill more and more healthy bystander cells. Additionally, their preliminary evidence suggests that NK cells from younger male subjects were more effective at killing senescent cells compared to female subjects, and also more effectively than older people of either gender. This is consistent with previous reports that older people’s NK cell armies included more dysfunctional or exhausted NK cells, which release less of the key immune signaling molecule interferon gamma (IFN-γ) and produce less of the chemicals needed to execute their targets. IF their initial finding of reduced senescent cell-killing ability pans out in a larger study, they can look at these and other mechanisms as potential reasons why and then look for ways to reverse or sidestep the effect of aging.

All around, the new paper sets up the SRF immunosenolytic team — and other scientists who can now read the findings for themselves — on a better path to identify ways to rejuvenate or reinforce senescent cell immune surveillance, reinvigorating NK cells to make them battle-ready once again.