Throughout the aging process, senescent cells accumulate and secrete a characteristic set of proteins, called the senescence-associated secretory phenotype (SASP). Although SASPs act as tumor suppressors and recruit immune cells to repair damage, they also mediate the deleterious effects of senescence and thus contribute to different pathologies, such as cancer, neurodegenerative diseases, and diabetes. Furthermore, SASPs can induce senescence in surrounding cells (called ‘secondary senescence’ or ‘paracrine senescence’), which can aggravate the effect. While there has been considerable research into the characteristics of primary senescent cells, not much is known about secondary senescent cells and how they are arise in vivo. 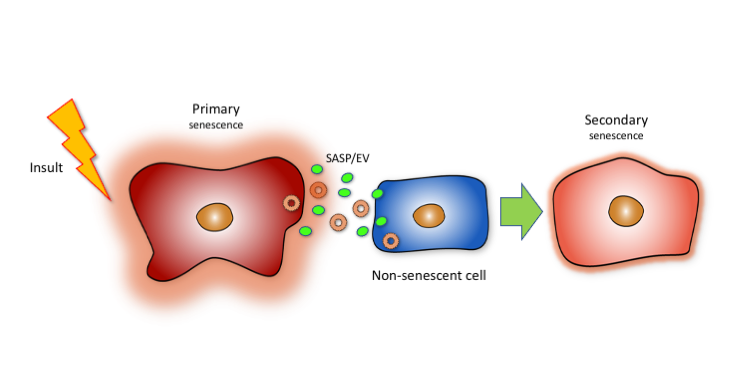 This project seeks to confirm the hypothesis that secondary senescent cells are different from primary senescent cells, and would therefore need a different senolytic to eradicate them. In addition, the project will study how SASP components mediate the spread of senescence. This work could provide us with a basis for new hypotheses of how to stop the spread, which in turn could lead to therapeutically viable interventions.

In 2020, the project achieved a major breakthrough in successfully isolating secondary senescent cells using a senescent cell surface marker. This has never been done before and will allow a more in depth analysis of the cells and how they are different from primary senescent cells. The project has already performed RNA sequencing of the two cell types, finding many differentially expressed genes. Secondary senescent cells have a significantly altered phenotype. In the coming year we will focus on confirming the results and using them to optimize senolytics.

This project is part of: