Throughout the aging process, senescent cells accumulate and secrete a characteristic set of proteins, called a senescence-associated secretory phenotype (SASP). Although SASPs act as tumor suppressors and recruit immune cells to repair damage, they also exacerbate the deleterious effects of senescence in the development of pathologies such as cancer, neurodegenerative diseases, and diabetes. Furthermore, SASPs can induce senescence in surrounding cells (called ‘secondary senescence’ or ‘paracrine senescence’), which can aggravate the effect. While primary senescent cells are fairly well characterized at this point, not much is known about secondary senescent cells and how they are arise in vivo.

This project seeks to confirm the hypothesis that secondary senescent cells are different from primary senescent cells, and would therefore need a different senolytic to eradicate them. In addition, the project will study how SASP components mediate the spread of senescence. This work could provide us with the basis for a new, therapeutically viable hypothesis for stopping the spread. 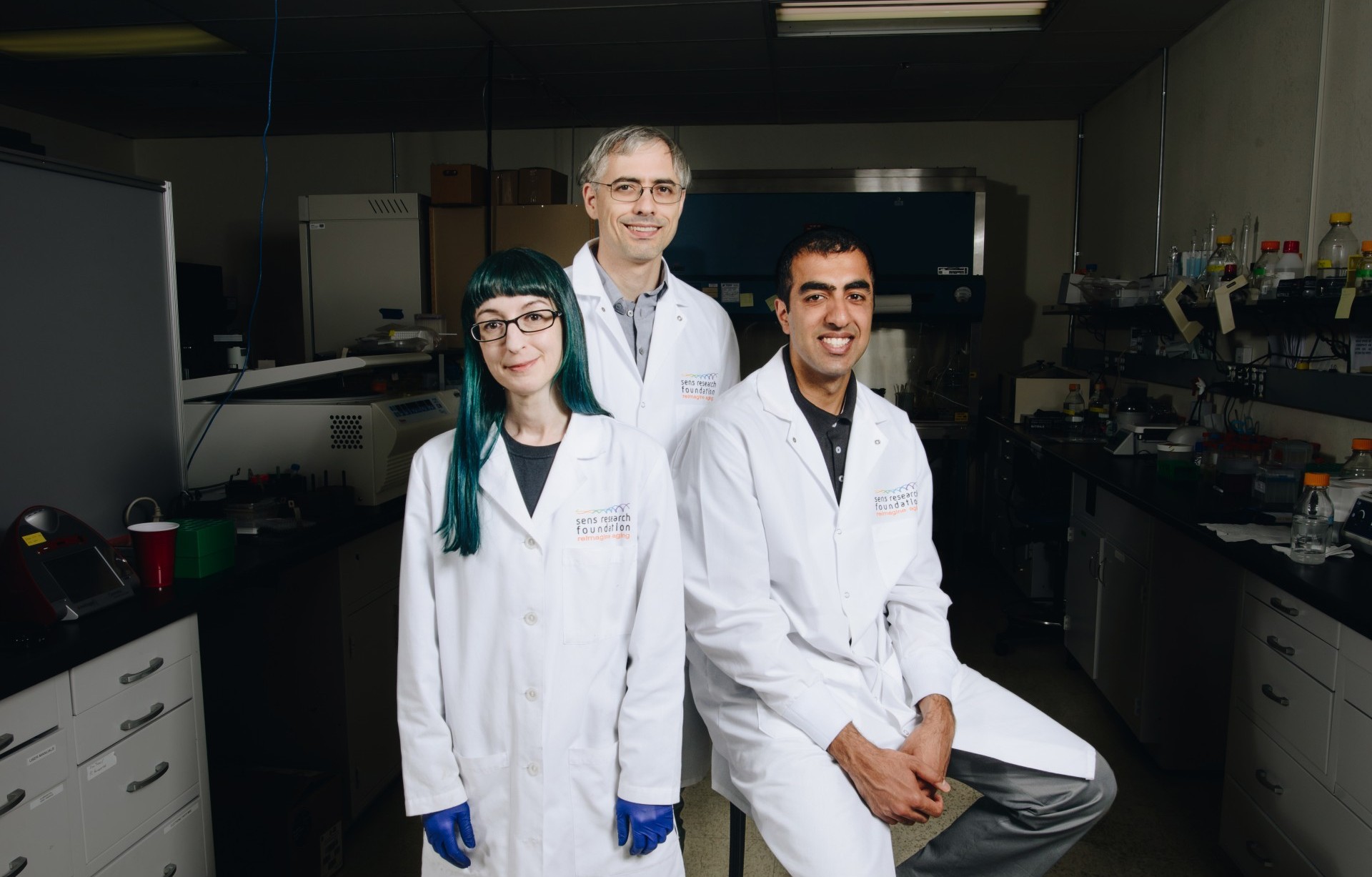 This research program has successfully spun-out into a company! Visit the Underdog Pharmaceuticals, Inc. website for more information on their transformative approach to atherosclerosis.

Many diseases of aging are driven in part by the accumulation of “junk inside cells:” stubborn, damaged waste products derived from the metabolic processes particular to specific cell types. The accumulation of these wastes disables the cell type in question and leads to their dysfunction; when, after decades of silent accrual, a critical number of these cells become dysfunctional, diseases of aging characteristic of that tissue erupt. For example, atherosclerotic lesions form when immune cells called macrophages take in 7-ketocholesterol (7-KC) and other damaged cholesterol byproducts in an effort to protect the arterial wall from their toxicity, only to ultimately fall prey to that same toxicity themselves. These macrophages – now dysfunctional “foam cells” – become immobilized in the arterial wall and spew off inflammatory molecules that in turn promote advanced atherosclerosis, heart attack, and stroke. In other organs, the accumulation of damaged molecules inside vulnerable cells drives Alzheimer’s and Parkinson’s diseases, as well as age-related macular degeneration.

Dr. O’Connor’s team have identified a family of small molecules that may be able to selectively remove toxic forms of cholesterol from early foam cells and other cells in the blood. If effective, these small molecules could serve as the basis for a groundbreaking therapy that would prevent and potentially reverse atherosclerosis and, possibly, heart failure.

A lead compound was identified following evaluation of data from human blood sample tests in conjunction with computer modeling to predict the likely behavior of rationally-designed molecules. Preliminary testing has indicated performance consistent with enhanced activity relative to the existing family of compounds: specifically, the candidate molecules exhibit selective targeting of toxic cholesterol byproducts, with significantly reduced affinity for native cholesterol. A patent application for this lead compound and others to be derived from it has now been submitted.

The team is now working to refine their original assay with the expectation that it will more accurately reflect the desired activity on toxic and native cholesterol, and also on an entirely different chemical approach to improved molecules derived from the original family. We are also working with a potential contract laboratory to test the absorption, circulation to tissues, and disposal of our lead candidate, and to perform toxicity assays. SRF has recently acquired a new robotic system to run the assay, which our in-house engineer, Anne Corwin, is now working to set up and program; the end result will be an increase in throughput that allows more rapid testing of more molecules. 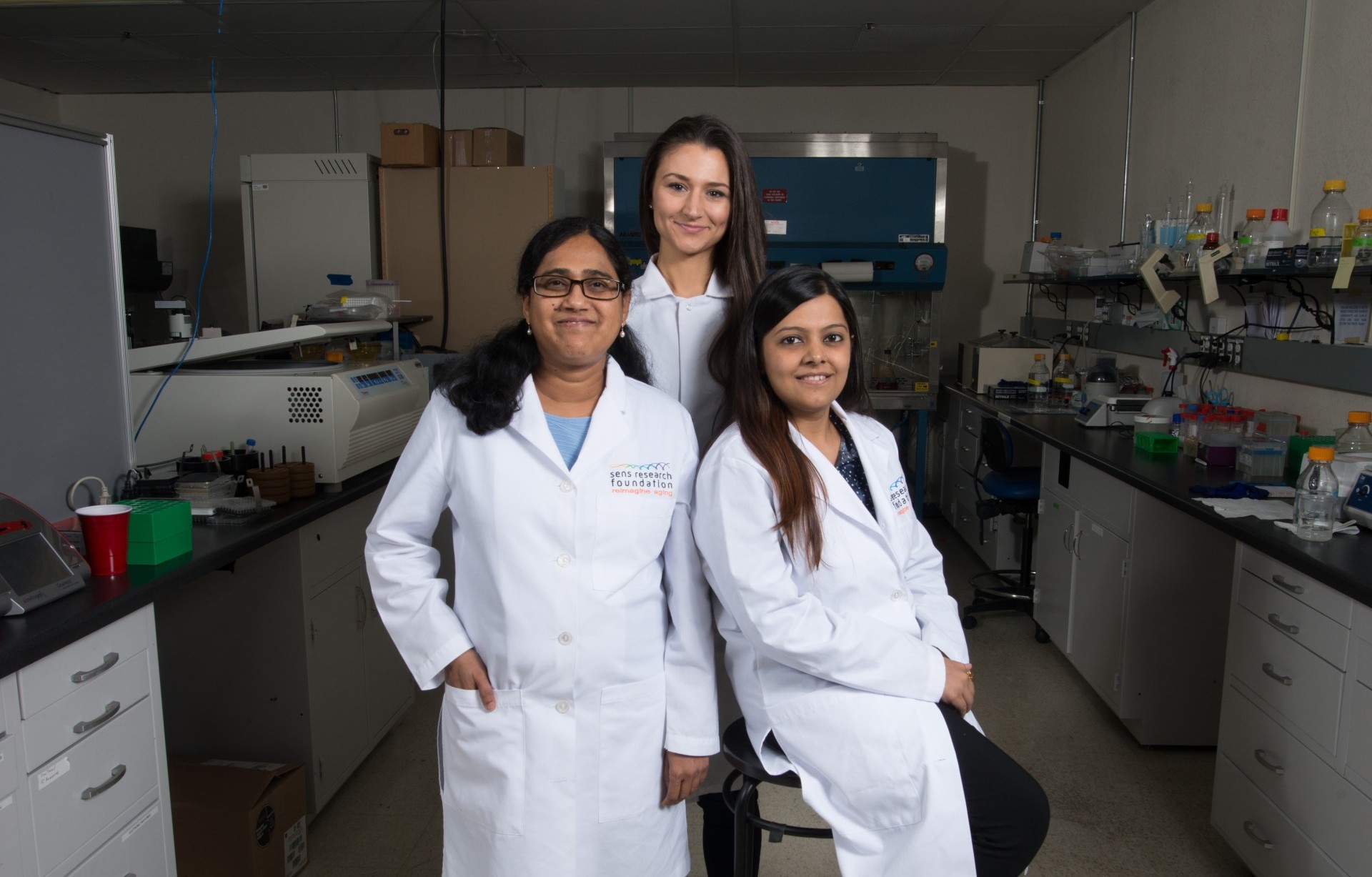 Mitochondria are the tiny cellular “power plants” in our cells, which take energy from our food and convert it into a form that can be used to power the cell’s energy-intensive processes. Unfortunately, like actual power plants, they generate waste – in this case called free radicals, which damage mitochondrial DNA (mtDNA) over time. As a result, some cells become burdened by these dysfunctional mitochondria and can accumulate in the body as we age. These damaged cells in turn export toxic molecules to far-flung tissues, contributing to Parkinson’s disease, age-related muscle dysfunction, and other conditions.

The MitoSENS goal is to engineer a solution to the accumulation of cells with these mutation-bearing mitochondria via allotopic expression.  Allotopic expression involves placing “backup copies” of all the protein-coding genes of the mtDNA in the cell’s nucleus. From this “safe harbor,” the copied genes can then direct the cell’s machinery to produce engineered versions of the missing mitochondrial proteins and deliver them to the correct location. With their full complement of proteins restored, mitochondria can resume producing energy normally – despite lacking functional copies of these genes to produce them on their own.

In 2019, the MitoSENS team achieved a major breakthrough in successfully demonstrating transient allotopic expression for all 13 mtDNA genes. This work was recently published in Redox Biology, 30 (2020) 101429. Several of these genes can be expressed stably and the team was further able to demonstrate a functional utility for these exogenous proteins in rescuing patient cell lines with specific mutations in the mtDNA genes ATP8, ATP6, and ND1 (Nucleic Acids Res. 44(19) 2016; 9342-9357 and Redox Biology 30 (2020) 101429).

Our current efforts are focused on validating this strategy in rescuing some of the more common inherited disease conditions observed as a result of mutations to mtDNA, such as Leber’s Hereditary Optic Neuropathy (LHON) and Leigh’s syndrome. We are also exploring alternative strategies and software based prediction models to optimize the expression of all 13 mtDNA genes and the transport and integration of their corresponding proteins into the mitochondria.

The MitoSENS team also has ongoing experiments to demonstrate efficacy in living, breathing mice – specifically,  a transgenic ATP8 mouse derived from the Maximally Modifiable Mice (MMM) created through the SENS Research Foundation-funded work at Applied StemCell. The new MMM-derived mouse model will have the allotopic ATP8 copy engineered into their nuclear genomes but will inherit functionally compromised mitochondria (and thus mitochondrial DNA) from a cross with FVB mice, which have a specific mutation in the mitochondrial ATP8 gene. This work is being done in collaboration with the Brand lab at the Buck Institute and will include biochemical and behavioral assays to evaluate if the allotopically expressed ATP8 gene can rescue the phenotype.

When normal cells lose their ability to replicate, they become senescent cells. Over time, senescent cells accumulate in aging tissues, spewing off a cocktail of inflammatory and growth factors, as well as enzymes that break down surrounding tissue and cause inflammation. This cocktail is the “senescence-associated secretory phenotype” or SASP. Senescent cells – and the downstream impact of the SASP – are now implicated in a remarkable litany of the diseases of aging.

On a more encouraging note, multiple studies have now documented that senolytic drugs and gene therapies that destroy senescent cells exert sweeping rejuvenating effects in aging, both in laboratory animals and animal models of multiple diseases of aging. In theory, however, senolytic therapies shouldn’t be necessary. The body’s immune system is on continuous patrol against senescent cells: our natural killer (NK) cells recognize senescent cells as abnormal, bind to them, and release substances that trigger the senescent cells to self-destruct.

An SRF-donor-funded collaboration between Dr. Judith Campisi’s lab at the Buck Institute and the SRF Research Center seeks to discover why senescent cells accumulate with age, and what might we do to enhance immune surveillance and elimination of these cellular saboteurs?

The Buck-SRF-RC collaboration is now seeking to drill further into the mechanism of senescent cell accumulation, and test interventions. At the SRF-RC, we are currently perfecting the method of co-culturing NK and senescent cells and controlling the killing process;  next, we will begin testing therapeutic interventions.

The SRF-RC scientists are also working for the first time with NK cells derived directly from aged human donors (rather than long-cultured lines of NK cells, or NK cells artificially “aged” by exposure to oxidative stress or extensive replication in culture, as has been done in the past). Using these cells will allow them to observe any direct effects of aging on NK cell senolytic activity.

Scroll back to top