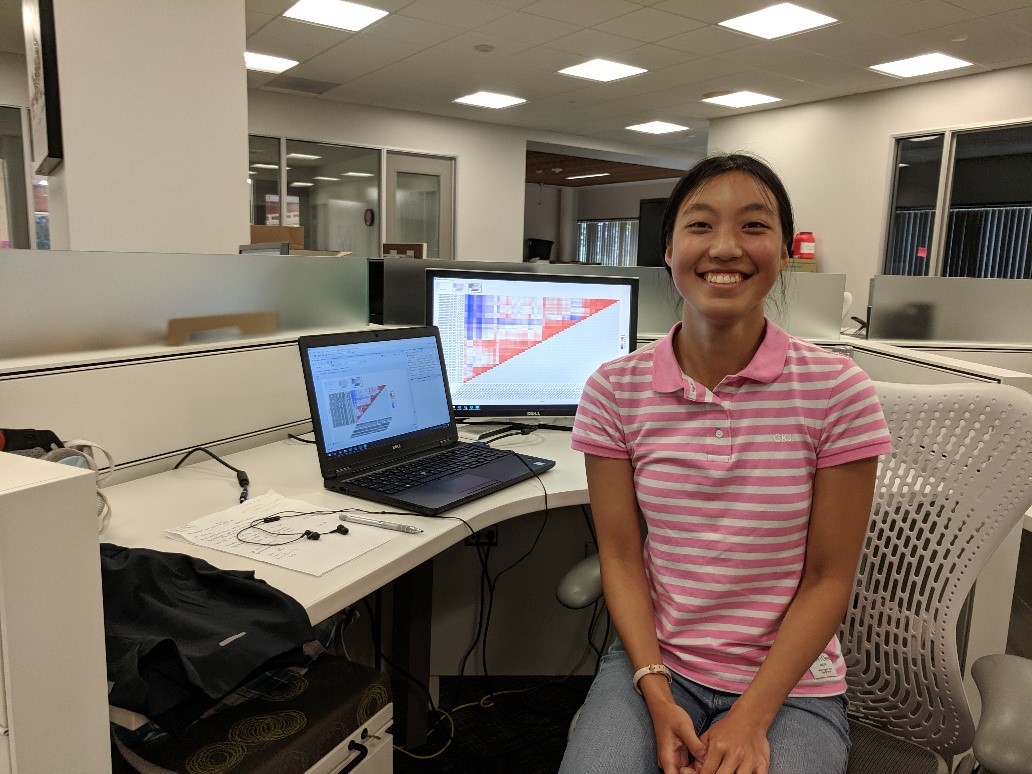 My name is Catherine Liu. I have a B.S. in Biomedical Engineering and plan to return to the University of Michigan for a Master’s in Biomedical Engineering. My undergraduate research experience consisted of exploring the implementation of a standardized procedure for 3D bioprinting blood vessel channel scaffolds as well as pressure-volume analysis of heart stiffness. This summer in the SRF Summer Scholars Program, I interned at Aspen Neuroscience under my PI, Dr. Jeanne Loring, and my project supervisor, Dr. Roy Williams. Aspen Neuroscience performs research primarily with human induced pluripotent stem cell (iPSC) lines, exploring the potential of stem cell transplantation for the reversal of neurodegenerative diseases such as Parkinson’s disease. The stem cell therapy project is composed of both stem cell reprogramming/differentiation and computational gene analysis. My main role in the project was computational: quality control and gene expression analysis. Though I was initially unfamiliar with bioinformatics, my coursework, wet lab experience, and computational experience allowed me to readily acquire foundational knowledge in cell biology and genetics as well as adapt to new programming languages and resources. Over the course of this project, I was able to verify the developmental stages of Parkinson’s patient stem cell lines and observe patient-level genetic differences.

Stem cells are a widespread research tool because of their ability to differentiate into many cell types. Consequently, they can be effective models and therapeutics for a variety of degenerative diseases. In one such disease, Parkinson’s disease, the loss of dopamine-producing neurons (DA neurons) in the midbrain results in tremors, impaired movement, and even symptoms of dementia. Stem cell therapy provides the potential to regenerate these neurons and reverse symptoms. In this process, stem cells are differentiated into DA neurons, which are then transplanted into a patient. Promising reversal of Parkinson’s has been shown in mammal models using embryonic stem cells and their less controversial counterparts, induced pluripotent stem cells (iPSCs). The Loring Lab has developed a pipeline to obtain iPSCs from Parkinson’s patient cells, differentiate them into DA neurons, and transplant them successfully into rodent models.

The primary goal of the lab’s spinout company, Aspen Neuroscience, is to translate this stem cell therapy pipeline to human clinical trials involving Parkinson’s patients. It is therefore essential to confirm the quality of cells developed through this pipeline prior to transplantation. One efficient method is by genomic data analysis. My project is to run quality control on a set of iPSC and DA neuron data from seven patients to screen their cells’ development. In addition to confirming that their iPSCs differentiated appropriately into neurons, I will analyze them for specific cancerous mutations. This computational quality control serves as an accurate, efficient, and consistent affirmation that cells are safe pre-transplantation. It is also important to conclude that the protocol produces consistent results for individual-derived stem cells. Consequently, I will also assess the degree of genetic changes over the course of stem cell differentiation between individual patients. The results will provide insight into how standardized the stem cell therapy protocol can be. Through comprehensive pipeline analysis of cell development data, my project computationally verifies the biological procedure necessary to produce a stem cell therapy that could potentially treat Parkinson’s disease in affected people.