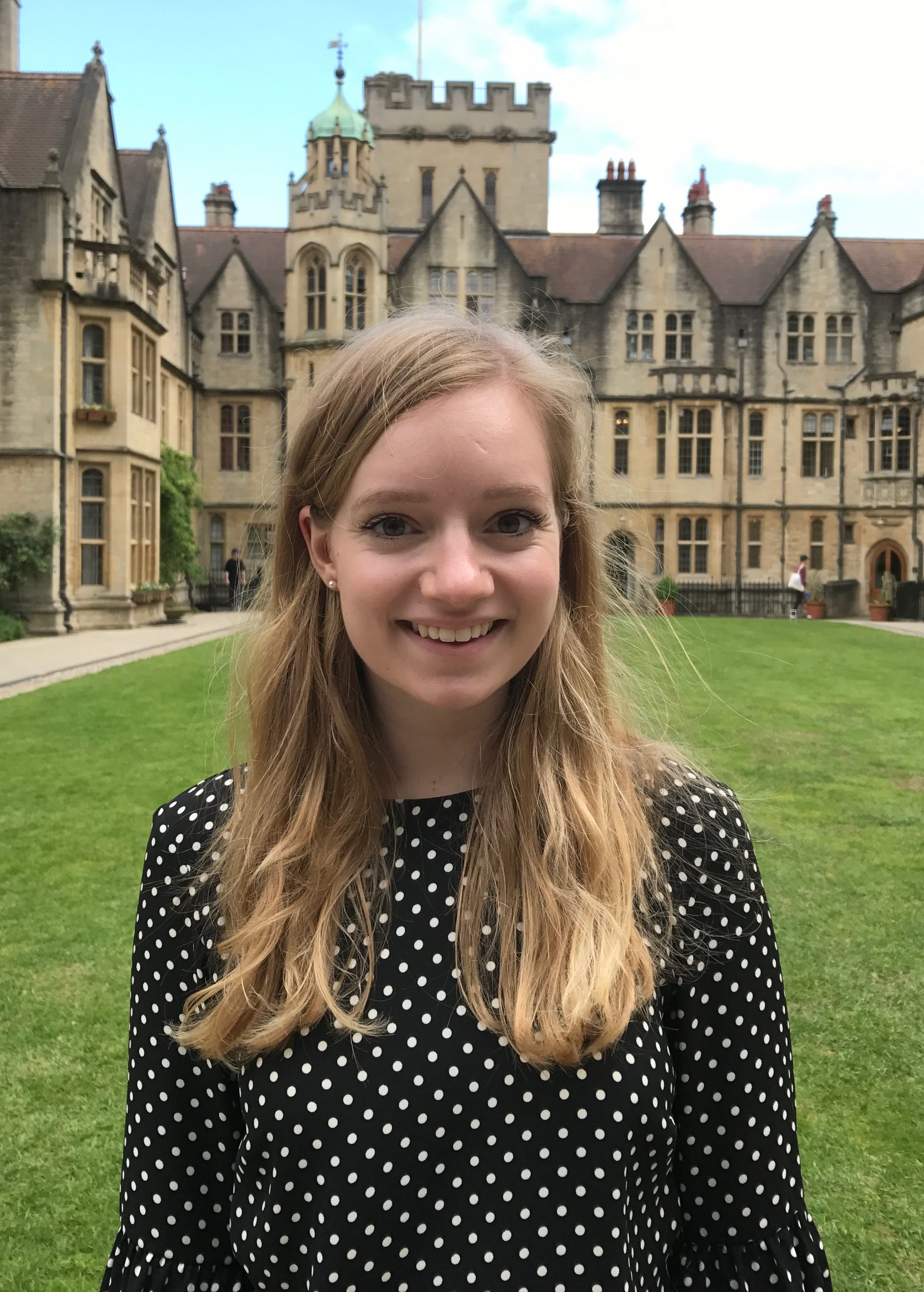 My name is Heather Tolcher, and I am a rising senior at the University of Texas at Austin. I am studying biochemistry, French, and international business as part of a Bachelors of Science and Arts degree program. My interest in targeted therapeutics and age-related diseases was first piqued when I had the opportunity to see the progression of an experimental immunotherapeutic drug go from the laboratory dish to phase I clinical trials in cancer patients. I was able to witness firsthand how powerful new-targeted treatments can be in controlling disease and transforming the lives of patients afflicted with cancer. Since then, I’ve known that I wanted to be involved in the community of scientists who develop the novel, translational, and innovative therapeutics that are evolving the way we treat and perceive disease.

As a summer undergraduate research fellow at the Mayo Clinic in 2016, I focused on determining the immunopathology of cerebral malaria in the Johnson Lab of Immunology. Here, I worked under the guidance of Dr. Aaron Johnson, Dr. Fang Jin, and Matthew Huggins. Human cerebral malaria is the most serious neurological manifestation of malaria, killing almost half a million people per year. While this disease has continued to pose a global health challenge, our understanding of Plasmodium falciparum parasite infection and its immunopathology remains poor. In my project, I sought to determine the role of different immune cells in the mechanism of blood-brain barrier (BBB) breakdown and its initiation of brain edema, which is the most severe and notable marker of human cerebral malaria. The blood-brain barrier is a selectively permeable membrane that protects the brain microenvironment in the central nervous system from circulating blood in the body. When the blood-brain barrier is compromised, cells from the body flood into the brain, leading to significant brain swelling and elevated intracranial pressure. This swelling is the biggest predictor of death and neuro-disability in children with cerebral malaria, and thus it is imperative to find better solutions to combat this disease and prevent blood-brain barrier breakdown.

Human cerebral malaria is unique in that the parasitic infection induces damage by hijacking the body’s own immune system. CD8+ T-cells (“killer T-cells”), are immune cells that usually kill damaged or infected cells. However, in cerebral malaria these killer T-cells are actually critical to the progression of the disease. This is why the disease has very clear immunopathology, and why researching it using an immunological perspective is necessary. While CD8+ T-cells usually protect us by recognizing parasitic antigens and killing infected cells, somewhere within the progression of cerebral malaria this normal function actually becomes misguided, which leads to the fatal outcome of cerebral malaria. Specifically, I studied the role of macrophages as potential antigen presenting cells (signaling molecules) for the initiation of experimental cerebral malaria. We hypothesized that macrophages might engulf parasitic debris and express parasitic peptides on their surface, thereby activating killer T-cells to expand, initiating the rest of the fatal response. By analyzing the CD8+ T-cell levels within the brain via flow cytometry, I was able to determine that macrophages play a role in the immunopathology of cerebral malaria as antigen-presenting cells. As far as personalized medicine goes, immunology continually fascinates me as one of the most innovative and powerful new therapies that harnesses the patient’s own ability to fight off disease without many of the harmful side effects that traditional therapies create.

For the past three years, I have been an undergraduate student researcher at the University of Texas at Austin within the Sarah Simmons Cell Signaling Stream. Under the guidance of Dr. Gregory Clark, I research the cellular signaling pathway within plant species in hopes of being able to increase crop growth and turnover in order to fight the growing problem of hunger. To do this, I analyze root hair growth patterns of model plants, such as Arabidopsis thaliana, under specific treatments of extracellular nucleotides and ATP analogs. In 2015, I was granted the Texas Institute for Discovery Education Fellowship and Scholarship to continue my research that identified the impact of non-hydrolysable ATP analogs on root hair growth. Since then, I’ve become a student mentor within the lab, helping other students learn laboratory techniques and develop their own novel research projects. This type of research is mainly aimed at discovering how we can manipulate the growth pathway within plant species in order to better grow crops in difficult regions, such as the desert and more recently, space, as well as how to grow plants faster. This will hopefully combat the growing problem of world hunger and help with environmental stability. When I return to my university, I will be starting a new project within the lab that is looking into the gravity control pathway within plant species, applicable to both earth and space plant science.

I was initially drawn to the SRF Summer Scholars Program in particular due to its concentration on groundbreaking translational research for age-related diseases. The SRF program uses novel and targeted techniques to combat some of the world’s most difficult diseases, be it cancer, Parkinson’s, or cardiovascular disease, and so I could think of no better program to help me develop into the scientist that I aspire to be than that of the SRF Summer Scholars Program.

Re-defining the Molecular Programmes that Drive Cardiac Development and Regeneration

At the University of Oxford, I am working in Professor Paul Riley’s Lab, in close collaboration with the Sauka-Spengler lab. Here, I am concentrating my efforts on determining the regenerative process of the heart, focusing on the epicardium. Cardiovascular disease is the leading cause of death worldwide and lacks effective long-term solutions. Myocardial infarction, also commonly known as a “heart attack,” leads to irreparable damage within cardiac tissue in patients. While many attempts using stem cells have been made to overcome the loss of function of cardiac tissue post myocardial infarction, they have suffered severe difficulties such as inefficient delivery, survival, and effective honing of stem cells to the target tissue. Thus, the main focus of this project is to develop a novel strategy to bypass ineffective delivery and stimulate cardiac repair in order to make a more efficient and effective therapeutic.

The human epicardium, the outer layer of the heart muscle, has vast potential for developmental plasticity and contributes to most cell types that form the heart. Epicardial signals also promote muscle and vascular growth. The epicardium persists into adulthood but resides in a state of relative dormancy where regeneration of cells is unlikely. However, this dormant state of the epicardium poses the possibility of the epicardium as a potential target for reactivation towards regenerating an injured heart. Certain animal species, such as the model organism zebrafish, can fully repair cardiac tissue that is lost by injury. In adult zebrafish, activation of the epicardium is observed during the immediate response to tissue damage.

This summer, I will be investigating the regulatory sequences that are differentially accessible in the regenerating adult epicardium based on ATAC-seq data recently generated in the Riley and Sauka-Spengler labs. This ATAC-seq data is a very useful assay that shows which chromatin regions on a specific gene are open and accessible and which regions may possibly act as regenerative enhancers on the epicardium. By selecting certain open chromatin regions at different stages of the regenerative process and by performing perturbation experiments in zebrafish, we aim to further elucidate epicardial contributions during cardiac regeneration. By more thoroughly understanding the molecular events that drive cardiac regeneration, we may be able to provide a new perspective and mechanism for clinical intervention after myocardial infarction.

I hope to pursue medicine after I graduate from the University of Texas at Austin. My long-term goal is to go into clinical research with an emphasis on neuroimmunology, as well as to work with and inspire other young female researchers to love and pursue science.