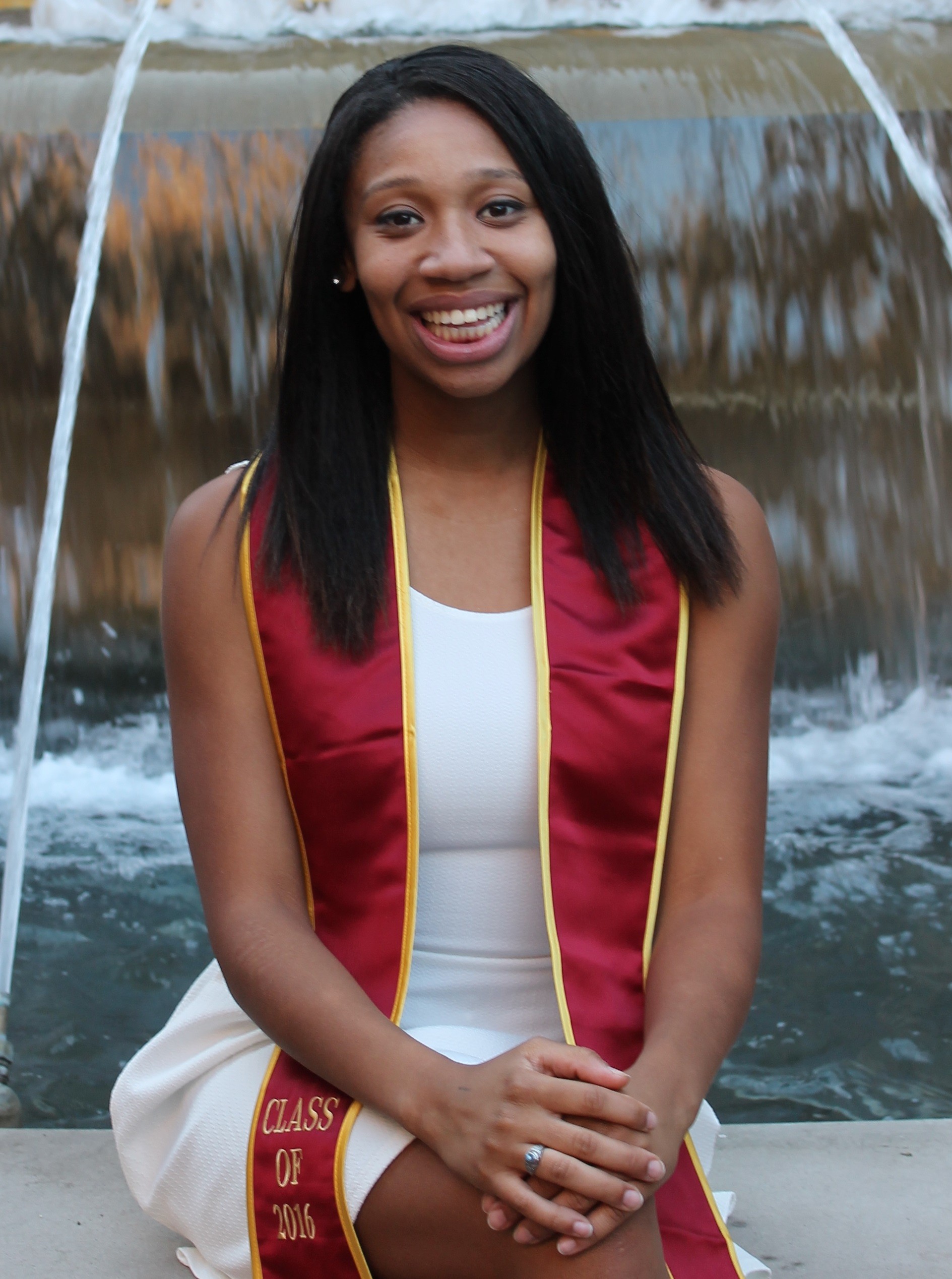 My name is Melissa, and I graduated this past spring from the University of Southern California with a Bachelor’s of Science in Neuroscience. Since high school, I have been greatly interested in cancer and its aggressive and potentially fatal nature. I have had first-hand experience shadowing oncologists and helping people afflicted with this horrible disease. As a result, I have insight into the detrimental physical, emotional, and psychological impact of cancer. SENS Research Foundation focuses not only on cancer research but also on many other age-related diseases as well, which is particularly unique and compelling to me.

In January 2014, I began studying the heterochromatin repair process in Irene Chiolo’s molecular biology lab at the University of Southern California. Heterochromatin is a silenced region of the genome enriched with repeats, leading this domain to be previously considered ‘junk DNA.’ It was later determined, however, that if heterochromatin is not properly repaired within a cell, there can be nuclear instability leading to predispositions to cancer (Chiolo et al., 2005). Dr. Chiolo’s lab is looking to better understand the heterochromatic DNA double-strand break repair pathway and its exact effect on nuclear and cellular stability. The SMC 5/6 complex has been determined to be an integral part of this repair process (Chiolo et al., 2011). During my time in the lab, I studied proteins previously found to be strong interactors with SMC 5/6 for their potential role in the pathway. By identifying proteins involved in the heterochromatin repair pathway, the Chiolo lab hopes to develop a better understanding of the tumorigenic process and, eventually, better and more precise strategies for cancer prevention and cure.

My project involved determining how best to illuminate the nuclear periphery for further study. The Chiolo lab uses fruit flies (Drosophila melanogaster) as their model organism because Drosophila nuclei have a physically separate heterochromatic domain, making any damage in the area easily identifiable and simpler to study. Previously, Dr. Chiolo’s research concluded that double-strand breaks (DSBs) in Drosophila heterochromatic DNA relocalized from the heterochromatic domain to the nuclear periphery to continue repair (Chiolo et al., 2011). Once a heterochromatic DSB is present, the cell relies on a process called homologous recombination (HR) for repair. HR depends on the use of the homologous chromosome as a template for repair. Since heterochromatin has extensive repeats, it is very easy to use the incorrect chromosome as a template. It is believed that DSB relocalization prevents aberrant recombination between incorrect chromosomes. What exactly occurs at the nuclear periphery, however, is largely unknown. Under my graduate student’s guidance, I was given the task of helping visualize damage foci movement better to track their path to the nuclear periphery. I accomplished this by creating plasmid constructs that fluorescently tagged different elements of the nuclear periphery, transfecting those constructs into Drosophila stem cells, and determining which construct yielded the brightest signal. Nuclear lamina proteins Lamin A and C gave an equally bright signal, which far surpassed the other six candidates. Ultimately, I was able to create a plasmid construct that greatly improves imaging for the lab while learning a host of lab techniques.

This summer, I will be working with the SRF Oncology Team under the guidance of Dr. Haroldo Silva and David Halvorsen to validate existing Alternative Lengthening of Telomeres (ALT) pathway assays and identify new cell lines that could be used for ALT study. Unlike prokaryotes, eukaryotic genetic material is organized into linear chromosomes, which poses a major problem for the cell: with each cellular division, the ‘lagging’ strand loses a segment of DNA, causing shortening of chromosomes. Telomere ends are enriched in TTAGGG repeats, which help to protect valuable genetic material from being lost with each division.

The enzyme, telomerase, can synthesize TTAGGG repeats de novo. This enzyme is present at high levels in germ cells but is found in lower concentrations in human somatic cells in order to prevent somatic cells from becoming cancerous. As a result, telomeres in somatic cells naturally erode, causing the cell to enter senescence (Cesare and Reddel, 2010). Cancer cells, on the other hand, exhibit a high level of cell proliferation for long-term survival. In order to achieve this state of immortality, cancer cells need to avoid senescence and, therefore, must continue to regenerate their telomeres. 85% of human cancers increase telomerase activity in order to achieve this immortality. 15% of cancers, however, rely on a recombination-dependent pathway called ALT. ALT+ cancers include Glioblastoma Multiforme, osteosarcomas, and other soft tissue sarcomas; all of these cancers are associated with a lower prognosis of survival (Cesare and Reddel, 2010). Additionally, previous research has shown that in the absence of telomerase, cancer cells will begin to use the ALT pathway for survival (Dilley and Greenberg, 2015). Thus, creating drug therapies that target the ALT pathway is of utmost importance.

Chromatin is stained by DAPI (blue), which helps to define the borders of the nucleus. PML and TRF2 (telomeric binding protein) foci are marked in red and green, respectively. In the ALT cells, overlap of the PML and TRF2 markers indicates the presence of an APB (yellow foci). Note the higher frequency of APBs in ALT cells (right) compared to non-ALT ones (left).

This summer, I will have two major goals: finding new ALT cell lines that can be used for future experiments and investigating drug treatments on ALT cell lines. Each of these projects will take advantage of a phenotypic characteristic that is unique to ALT cancer cells. The first phenotypic feature is the abundance of extrachromosomal telomeric DNA called C-circles. These partially double-stranded pieces of genetic material have been highly correlated with the ALT process and their presence in the nuclei of ALT+ cells is used to determine and quantify ALT activity. Currently, SRF has a partnership with Capital Biosciences to confirm their qPCR assay results regarding the presence or absence of ALT activity. This summer, I will be using our dot blot and high-throughput methods of C-circle analysis to attempt to confirm their results. More importantly, this project would allow SRF to identify new ALT+ cells lines that could be used for study not only by SRF’s Oncology Team but by all ALT researchers.

My second project will involve further development of another assay, which could give researchers another reliable indicator of the ALT pathway. This assay will take advantage of the presence of ALT-related Promyelocytic Leukemia (PML) bodies in ALT+ cell lines. PML bodies are domains within the nuclear matrix that have been implicated in a range of cellular functions. PML bodies with telomeric DNA are highly characteristic of ALT+ cells and are referred to as ALT-associated PML bodies (APBs) (Cesare and Reddel, 2010). Although APB’s have been proven not to be necessary for ALT activity, the two are highly correlated (Dilley and Greenberg 2015). Last summer, a modified APB assay was created that combines two techniques: fluorescent in situ hybridization (FISH) to detect the present of telomeric DNA and immunofluorescence detection of PML protein found in APB’s. Using this modified assay, I will treat cells with drugs that have a known impact on ALT activity. I will compare the data resulting from this experiment with C-circle assay results that I will produce. If the results match, this can help validate APBs as a marker for ALT cancer research.

My long-term goal is to be a physician-scientist by earning both an MD and PhD. I would like to earn my PhD in cellular biology or a related field and become a radiation oncologist. Oncology has been an interest of mine for several years and becoming an MD/PhD would allow me to attack the topic from the bench and the bedside. During my two years before beginning medical school, I plan to return to Los Angeles to continue cancer research from a molecular perspective.