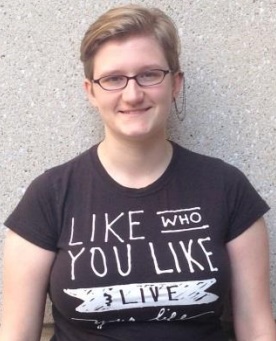 My name is Sophia Szymkowiak, and I am a rising senior at Yale University, working toward Bachelor of Science degrees in Biomedical Engineering and Women’s, Gender, and Sexuality Studies. Within the BME major, I have chosen the “Biomolecular Engineering” track, which encompasses a wide variety of subjects, including drug delivery, tissue engineering, and gene therapy. My unofficial focus within that track is regenerative medicine techniques, specifically biomaterials and tissue engineering. My interest in SRF comes via my fascination with the endless possibilities on the horizons for medical technologies. Dreams of capabilities once relegated to science fiction are becoming a reality, and I am determined to take part in that transformation. Illness due to aging involves the degeneration of the body’s functions or organs, which until now has been treated by masking symptoms rather than treating the cause.

I initially became involved with research and with biomedical engineering in high school. I spent five weeks during the summer of 2010 at Yale University in the lab of Dr. Mark Saltzman, assisting in the optimization of PLGA nanoparticles for the targeted delivery of a chemotherapeutic drug. I was responsible for assessing the drug release profile and cellular uptake of the particles to establish the optimal drug loading concentrations and polymer formulations. My data led to the lab’s choice of the drug loading required for maximum efficacy with minimal side effects. Following the end of my tenure in the Saltzman lab, the project led to the development of a treatment for fatal intracranial tumors through a combination of the controlled-release nanoparticle drug system that my research helped optimize, which was originally being developed for treatment of lung cancer tumors, and a system of drug delivery involving direct injection into the brain.

Then, as an undergraduate student, I spent ten weeks in the summer of 2012 at Yale University in the lab of Dr. Anjelica Gonzalez, working on a hydrogel system to analyze the properties of neutrophils, as mediated by their surface integrins. Neutrophils, or white blood cells, are critical to wound healing, inflammation, and immune response. Understanding the mechanisms of their motility and adhesion to the walls of blood vessels could allow better control of inflammatory diseases and wound healing. My project was to conjugate a peptide sequence to a polyethylene glycol hydrogel, using methods that had been established in similar studies. Fresh human neutrophils were then added to the surface of the hydrogel, and their adhesion to that surface and ability to migrate using integrin-peptide attachment were evaluated. The hydrogel system allows analysis of a neutrophil’s interactions with the single peptide or combination of peptides that are conjugated to the surface. My data contributed to the ongoing project of characterizing neutrophil integrin-peptide interactions to better understanding wound healing and immune response.

This summer, I am working on a project under the mentorship of Dr. Sunyoung Joo, Dr. James Yoo, and Dr. Anthony Atala to generate in vitro ovarian tissue that can mimic the functions of the ovary to preserve or restore what might otherwise be lost due to disease or other medical treatments. Ovaries serve two very important functions in the body: hormone production and reproduction. Loss of ovarian function due to menopause, polycystic ovarian syndrome, chemotherapy, radiation, or any other cause, either natural or induced, not only causes infertility but also causes other hormone-related physiological complications. While conventional hormone replacement therapy, in the form of an injection or pill, is able to maintain female secondary sexual characteristics, this therapy has its own set of complications and side effects and is unable to restore fertility.

Pictured is a Day 3 cell aggregate stained for ZP1 (a zona pellucida marker) in green and DAPI (a DNA marker to identify nuclei) in blue.

For my study, ovarian cells will be isolated from the ovaries of three-week old female Fischer rats using methods previously established. Cells from these samples will be cultured in a micro-well system for several days to allow them to form clumps of cells. The cells either will be cultured in standard germline stem cell media alone or will also be cultured with luteinizing hormone (LH) and follicle-stimulating hormone (FSH). LH and FSH are gonadotropins, meaning they are produced in the body to stimulate the production of hormones, including β-estradiol and progesterone. The cell growth media will be removed daily and assessed for the presence of those two hormones using a diagnostic immunoassay, called an ELISA. Cells will be fixed and preserved in paraffin every other day for H&E morphology analysis and staining of FSH and LH receptors or a marker for the zona pellucida marker, which is a glycoprotein membrane that surrounds the plasma membrane of oocytes, or egg cells.

Creation of ovarian tissue that can produce fertile eggs and the necessary hormones would provide numerous benefits to women of all ages. The results of this study will demonstrate the influence of LH, FSH, and interactions between the two on the production of physiologically necessary hormones and any morphological changes that result from the gonadotropin stimulation, which is an important step in a much bigger project.

In the fall, I will be returning to Yale and joining a new lab to do the research for my BME senior thesis. My WGSS senior thesis is already in the works and will hopefully be completed by the end of the first semester of next year. After graduation, I am hoping to find a position at a biotechnology company to gain some industry experience for a few years before returning to graduate school to earn an M.S. or Ph.D. degree.