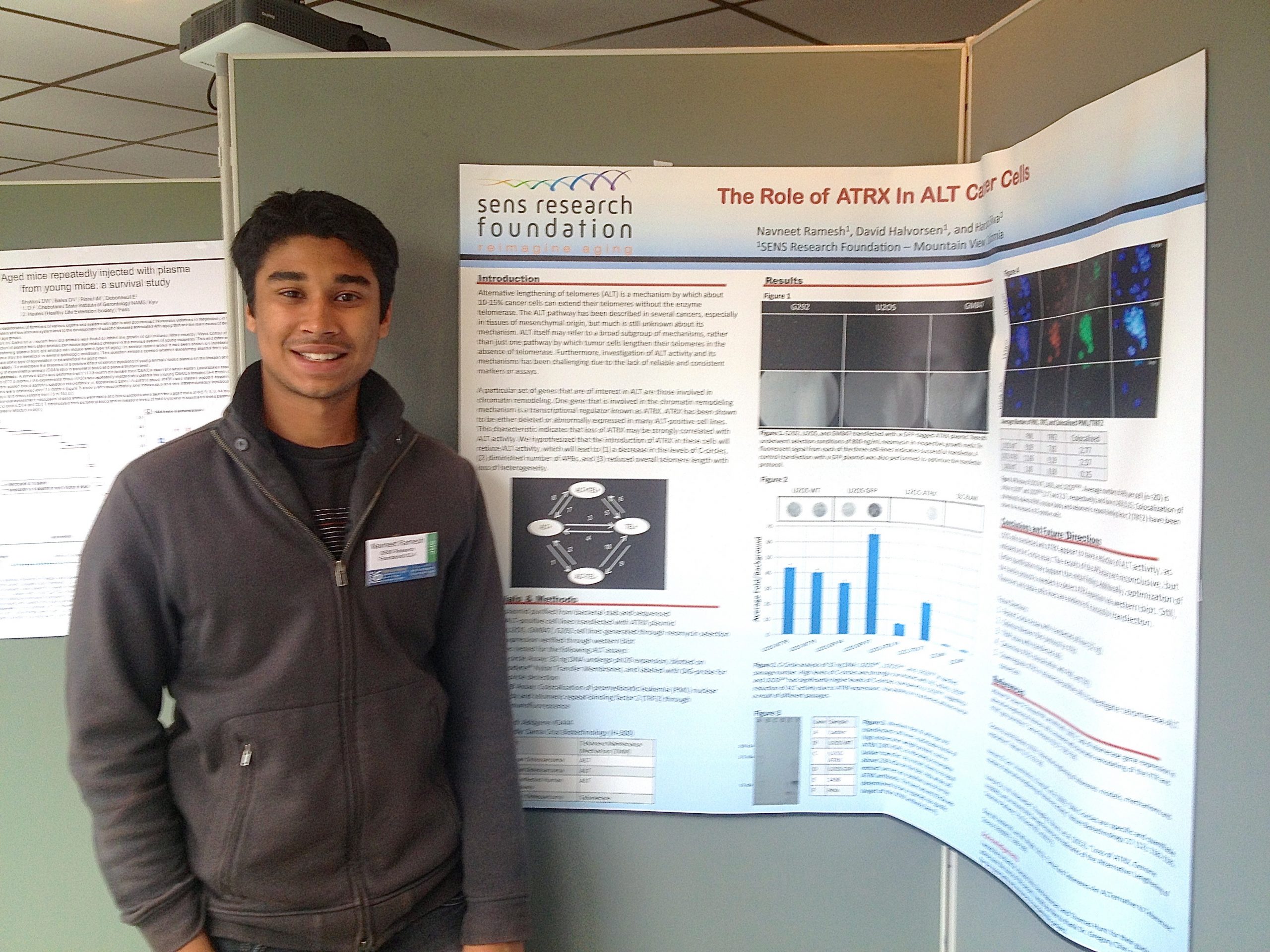 Navneet is currently a junior at UCLA, majoring in Molecular, Cell, and Developmental Biology, with a minor in Biomedical Research. Since September 2012, he has been studying an endocytosis gene that is implicated in cancer at the laboratory of Dr. Julian Martinez-Agosto. Navneet has shown that mutations in this gene cause abnormal cell growth in fruit flies.

During his 2013 SENS Research Foundation (SRF) summer internship, he studied the regulation of a telomere maintenance mechanism which plays a role in tumor cell immortalization.

In most cases, tumor cells owe their indefinite longevity to the enzyme telomerase, which continuously extends their telomeres. However, 10 to 15% of tumor cells can maintain telomere length without telomerase function. This second method of telomere maintenance is referred to as “alternative lengthening of telomeres,” or ALT. The exact mechanism by which ALT occurs remains unknown, but several chromatin remodeling genes have been implicated. Several types of cancer cells, especially in tissues of mesenchymal origin, exhibit the ALT phenomenon.

During my internship, I attempted to determine how the ALT mechanism could be overcome. Previous studies have demonstrated that a transcriptional regulator involved with chromatin remodeling, known as ATRX, is either deleted or abnormally expressed in cells which use the ALT mechanism. I hypothesized that introduction of ATRX could inhibit ALT activity. Therefore, I predicted that expression of ATRX in ALT-regulated cells would lead to a reduction in markers of ALT activity, such as C-circles, ALT-associated PML nuclear bodies (APBs), and, of course, telomere length.

To test this hypothesis, I transfected three cell lines that utilize the ALT mechanism with an ATRX expression construct and measured the resulting effect on ALT activity. Preliminary data in the following figure indicates that ATRX expression in the osteosarcoma U2OS cells does indeed reduce ALT activity. Note that fewer C-circles were detected in cell lines expressing ATRX compared to a comparable cell line expressing GFP.

With these promising preliminary results in hand, SRF researcher David Halvorsen is working to confirm the functional expression of exogenous ATRX in the U2OS cell line bearing the ATRX expression construct. He also plans to study the effect of ATRX expression on APBs and telomere length.

Navneet has resumed studying the endocytosis gene implicated in cancer in the Martinez-Agosto lab at UCLA with the hopes of identifying which signaling pathway is responsible for the abnormal cell growth observed in mutant flies.

When he’s not in lab, Navneet loves watching football, catching up on technology-related news, and learning how to cook. After graduating from UCLA, he plans to embark on postgraduate studies and work toward an MD or MD/PhD.