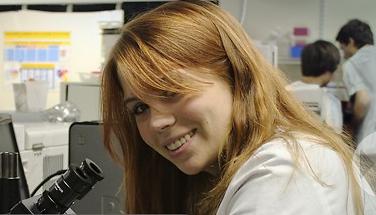 Jennie received her B.A. with majors in Molecular Cellular and Developmental Biology, Integrative Physiology, and Neuroscience, from the University of Colorado at Boulder in May 2012. During her time at Boulder, she worked on a variety of research projects spanning subjects ranging from biochemistry to oncology. Jennie’s work culminated in a project in her final year working under Dr. Joaquin Espinosa at the faculty of Molecular Cellular and Developmental Biology, examining the molecular pathways of hypoxia-induced gene transcription in cancer cell lines.

During her internship with SENS Research Foundation (SRF) in Mountain View, CA, Jennie attempted to identify genes involved in the Alternative Lengthening of Telomeres (ALT) Mechanism.

Exploring The Genetics of Cancer and Telomere Lengthening

“One characteristic of tumor cells that makes cancer treatment difficult is the ability to evade cellular senescence. The DNA at the end of chromosomes, called telomeres, normally shorten as a result of many cell divisions, eventually triggering senescence. This process of replicative senescence enables an organism to remove older cells from the body.

Tumor cells typically avoid senescence by maintain telomere length with the enzyme telomerase. Clinical trials are already underway to test drugs that target this aspect of cancer cells. However, there is a second mechanism by which telomeres can be elongated in the absence of telomerase, known as Alternative Lengthening of Telomeres (ALT). Since understanding the ALT mechanism will be critical to any cancer therapeutic that targets telomerase, the aim of my summer project was to identify ALT-control genes.

I compared the expression of one gene suspected to be involved in the ALT pathway, ZScan4, in six osteosarcoma lines. Three cell lines display the ALT phenotype (SAOS-2, U2OS, and G292) and three that do not (143B, SJSA-1, and HOS). I hypothesized that the genes overexpressed in the ALT cells relative to the non-ALT cells would be genes which control the ALT pathway.

Since I did not find consistent overexpression of ZScan4, ZScan4 is probably not a necessary component of the ALT mechanism. To identify further potential candidates, I prepared cell samples to construct a cDNA library. This library can be used in the future to identify genes in the ALT pathway.”

After completing her summer internship, Jennie was recruited by former SRF researchers in Central New York and co-founded Ichor Therapeutics, Inc.  The company works to develop and commercialize research and clinical products in the field of regenerative medicine.  She is listed as co-author on the company research and business proposal that landed a $450,000 seed grant from Life Extension Foundation. In addition to her work at Ichor, she is currently a laboratory assistant at the lab of Dr. Sarah E. Hall at Syracuse University’s College of Arts and Sciences.